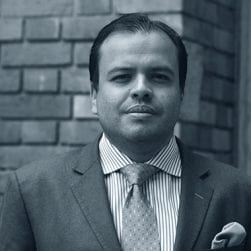 Juan Felipe is a lawyer from University of Rosario. With LLBs in Intellectual Property and Economic and Market Law from the same University. Magister Candidate of WIPO, INPI (Argentina) and Austral University of Buenos Aires. He has advance courses in Consumer Law, Foreign Investment, Procedural Law, White Collar Crimes and Competition in various institutes and universities. He is fluent in Spanish and English.

Juan Felipe obtained a perfect score in its JD admission (400/400), was exempt from presenting his final exams due to its high score in the Estate Superior Education Tests. He was awarded a partial scholarship in his first postgraduate study. He was tutor as a student at the Intellectual Property Course at University of Rosario, and when he got his J.D. and assistant professor of Civil Law on Property. He started his career as a student at Baker & Mckenzie in 2006, and in 2008 became part of OlarteMoure, where he has been Junior Associate, Associate, Senior Associate, the first Coordinator for Trademarks, Copyrights, Competition, Corporate and Consumer Law, and currently is Director for Litigation and ADR and Member of the Firms’s Executive Committee.  International Publications highlight his responsiveness and his answers in depth, along with his strategic and creative view, his pragmatism and its legal soundness. His practice involves all areas of the Firm, with notably more involvement in Litigation, its prevention, and attending Commercial, White Collar and Arbitral Processes, regarding Intellectual Property (including Antipiracy and Anticounterfeiting) and Competition (Pre-clearance for M&A, Antitrust and Unfair Competition).