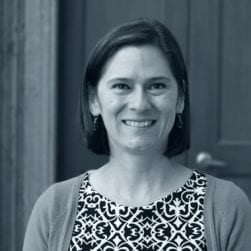 Elsa obtained a B.Sc. in Pharmaceutical Chemistry from the Universidad Nacional de Colombia (Bogota, Colombia) in 1993. She later continued with her postgraduate studies and obtained a Master’s Degree in Microbiology from the same University in 2005.

During first years of her professional practice, Elsa worked in Education. Later, as a postgraduate student, she worked for Research Group in Molecular Epidemiology of Nosocomial Infections at the Instituto de Biotecnología de la Universidad Nacional. There she took part of several research projects in topics related with drug – resistant microorganisms and nosocomial related microorganisms. After getting her degree, Elsa continued working for this research group and for the Bioinformatics Research Group in the same University. She participated in the design and development of several research projects, draft and review of research reports and she was co-author of research articles for national and international scientific journals. At the same time, during last years, Elsa has been editor of books translated from English into Spanish for Victory Productions Publisher (Worcester, MA).