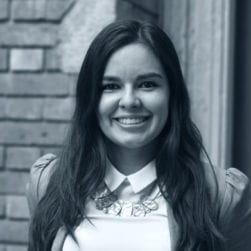 Viviana received her title in Chemistry from the Industrial University of Santander (UIS, Bucaramanga, Colombia) in 2013. That same year, she received her certificate as Internal Auditor in H.S.E.Q from S.G.S Colombia.

Her college internship was focused on the synthesis, characterization and determination of the pharmacological capacity of the principal components present in the essential oils and extracts from the native plants of the region of Santander, where she acquired relevant knowledge in synthesis, characterization and the use of instrumental techniques like gas chromatography, UV- VIS spectrometry, mass spectrometry and atomic absorption. In 2014 she worked as an Investigation Assistant for the Investigation and Extension Directory of the Science Faculty of the UIS. She was responsible for the implementation of an integral management system for the certification of the Biochemistry and Microbiology Laboratory, following the ISO 17025 regulation. In 2015, Viviana joined OlarteMoure (Medellín) and since then she works as a Technical Associate in the Patent Area, where she drafts and prosecutes patents in the chemical and biotechnical sectors. Since 2016, she is as a member of the office in Bucaramanga.