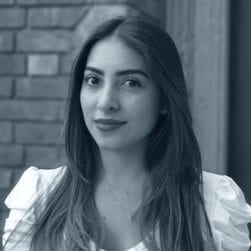 In 2013 she began pursuing her legal studies at Rosario University. Later in 2015, Isabela continued her studies under scholarship at the University Carlos III of Madrid, and advanced courses of Transnational Business Transactions directed by the same university and Seattle University. She finished an internship in the Leganés Court N° 7, alongside judge Rafael Rosel Marín.

On 2017, Isabela joined OlarteMoure, as an associate for OlarteMoure´s Litigation and ADR Area. Her daily professional activity involves litigation regarding various practices, namely Copyright, Entertainment and Media Law, Trademarks, Unfair Competition, Antitrust, Corporate Law, Consumer Protection, Commercial and Administrative Litigation. She also works on prevention and clearance as a pre-litigation scenario related to entertainment law. In addition, she co-authored the article “The plane waited for clearance to take off – Clearance and IP in Audiovisual Productions” to be published in 2020.