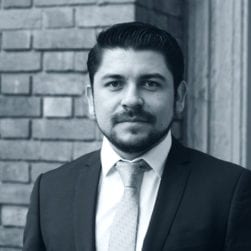 David obtained a B.Sc. in Pharmaceutical Chemistry from the Universidad Nacional de Colombia (Bogota, Colombia) in 2014. During that year he also took translation courses at the same institution.

His practice has been focused on patent applications prosecution, given he was an intern in the Patent department at OlarteMoure since 2012. He is widely familiarized with the terminology and documents associated with intellectual property.