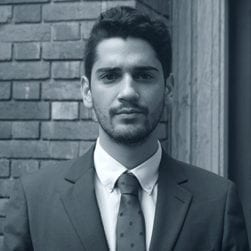 Alberto is a Lawyer from the Universidad del Norte (Barranquilla, Colombia). During his years of study he was awarded the prize for being the winner of the “First Debate of Legal Sciences of the Universidad del Norte”, and was exempted from presenting preparatory exams for obtaining the degree. He studied at the Pennsylvania State University (PennX) “Certificate Program in Intellectual Property Law and Policy”, as well as the “General Course on Intellectual Property” of the WIPO.

Alberto served as an instructor of the subjects Theory of the Administrative Act and Labor Relations and Social Security I of the Universidad del Norte.

He worked as an intern for Labor Relations at Parmalat Colombia Ltda, and for companies such as Tecnoglass S.A.S, Redsis S.A and in the Section of crimes against economic assets in the National General Prosecutor’s Office.

Since September 2019, he has worked at OlarteMoure as a lawyer for the IP&T area.